Maltese food has a long and rich history. Numerous diverse events and influences have helped shape it into the cuisine we know and love today. Over centuries, the food has adapted to historical events, culinary resources, and various cultural influences while staying true to traditions. Similarly, Cake Art Malta strives to honor tradition in fresh and innovative ways. Malta is an archipelago (group of islands) in the southern Mediterranean Sea. It is geographically close to Italy (specifically Sicily), Greece, and North Africa (specifically Tunisia and Libya), so its cuisine was heavily influenced by these cultures’. Malta was ruled at one time or another by the Sicilians, Phoenicians, Carthaginians, Romans, Byzantines, Arabs, Normans, Spanish, Knights of St. John, French, and British. Each of these occupations contributed something unique to the archipelago’s culinary traditions. Malta’s signature dishes include a lot of fish, seafood, and produce, historically based on what was in season or readily available.  There are also many unique delicacies adapted from the cuisines of neighboring countries and occupying forces.

Stuffat tal-fenek (rabbit stew) emerged as a popular dish due to historical events and is today considered the national dish of Malta. During the Middle Ages (1000-1500 AD) rabbit was so affordable, it was called “the beef of the lower classes”. (This happened because the Phoenicians brought rabbits to Malta when they arrived around 700 BC to colonize it as a strategic trade outpost, and the rabbits multiplied rapidly in the countryside.) Rabbit was so widely hunted that the Knights of St. John (a medieval Catholic military order ruling Malta from 1530 until the 1780s) banned it until the late 18th century to conserve the rabbit population. Once the ban was lifted, Fenkata became popular. It is actually served as two courses: The first is pasta tossed in a ragú of rabbit, wine, and herbs; the second is the rabbit meat served in a similar sauce, with a side of peas and thick-cut fried potatoes. (The fries or “chips” reflect the British influence in Maltese food).

Is-soppa tal-armla (“widow’s soup”) is a common dish made of in-season vegetables such as beans, peas, cauliflower, potatoes, and carrots, mixed with a tomato paste called kunserva. It gets its name from the charitable custom (dating to Medieval times) of giving widows vegetables so they wouldn’t starve. Soup was historically made as a meal in itself, so the is-soppa tal-armla would usually be accompanied by a poached egg or round of gbejna (a cheese made of sheep’s milk, salt, and rennet (curdled milk from the stomach of a young unweaned calf, used to ferment the milk to make cheese)

Torta-tal lampuki (lampuki pie) is another favorite dish, made of a silver and golden fish called lampuka (also known as mahi-mahi or dolphinfish which swims between Malta and its sister island Gozo from August until November, then winters in the Atlantic Ocean) mixed with olives and spinach, plus any other in-season produce. Lampuki can also be shallow-fried (portion-sized pieces are dipped in batter, then fried in enough oil to cover them halfway) or oven-baked, and are usually served with tomato sauce containing capers, olives, onions, and fresh herbs. (One hallmark of Maltese cooking is that recipes tend to be passed down within a family and adapted to the season so there is tons of variety even among traditional dishes. Cake Art Malta aims to recreate this adaptability by allowing customers to order unique cakes tailored to their specifications, beautifully decorated for any occasion. See https://www.cakeartmalta.com for more information.)

The Maltese have a favorite savory pie called timpana, made of pasta such as penne or macaroni mixed with beef or offal (entrails), then baked in a puff pastry. It is believed to be based on a similar Sicilian dish called timballo. It was traditionally prepared as a Sunday meal in communal village ovens which the women frequented for their baking. Now it is enjoyed during Christmas festivities as a main dish, made with pasta, a meaty tomato sauce, and eggs and cheese, baked in a short-crust pastry with puff pastry on top.

Pastizzi (singular: pastizz) are savory, flaky croissants filled with cooked peas or ricotta cheese. The pastry is prepared similarly to Greek phyllo (stretched, folded with layers of fat, and rolled several times to achieve flakiness), then folded based on the contents: Pastizzi with peas are folded on the side, while pastizzi with cheese are folded down the center. The flaky croissant reflects Arabic (via North Africa) culinary influences, while the fillings are derived from southern Italian cuisine. Several variations on pastizzi have emerged in another testament to the adaptability of Maltese cuisine. Qassatat are bigger, pie-shaped, and made with a pea, ricotta, or spinach filling. Tax-xema is a puff pastry form made in round and half-moon shapes. Chicken pastizzi also exist, as well as varieties that use gbejna instead of ricotta.

Many Maltese sweets are seasonal and derived from religious practices. An example is Qaghaq tal  ghasel (treacle or honey ring). This is commonly made for Christmas or Fat Tuesday (sometimes called Carnival) and contains a mixture of marmalade, sugar, lemons, oranges, spices, vanilla, and syrup known as qastanija. It is formed into a ring shape and baked. Another is Kwarezimal, a Lenten biscuit made of ground almonds, honey, and spices and baked in an oblong loaf. They are made without eggs or butter because the Catholic Church (a heavy influence in Malta since St. Paul the Apostle is said to have introduced Christianity in 60 AD) used to insist on abstinence from animal products for the 40 days of Lent. In fact, Kwarezimal comes from the Italian word quarezima, which refers to Lent. Nowadays, kwarezimal are available year-round, often served topped with chopped nuts.  Lent ends with Easter (the Christian holiday commemorating the resurrection of Jesus), and to celebrate, the Maltese have traditionally made figolla (singular of figolli, thought to come from the Italian figura, or figure). These are marzipan-filled cakes iced and topped with sugar or chocolate and cut into shapes associated with fertility and abundance like rabbits, hearts, and fish. Although figolli are now part of a Christian celebration, they probably actually originated in Phoenician celebrations of the pagan goddess Astarte (of fertility and sexuality). 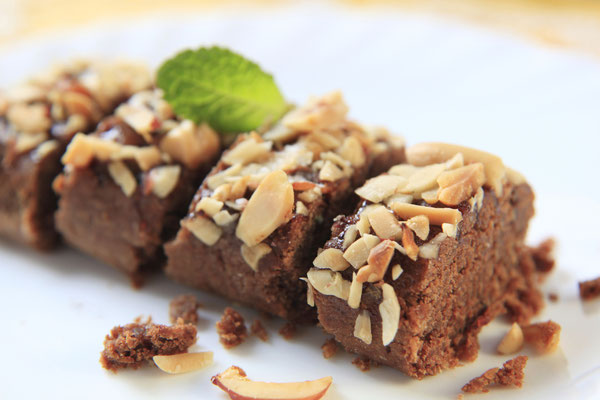 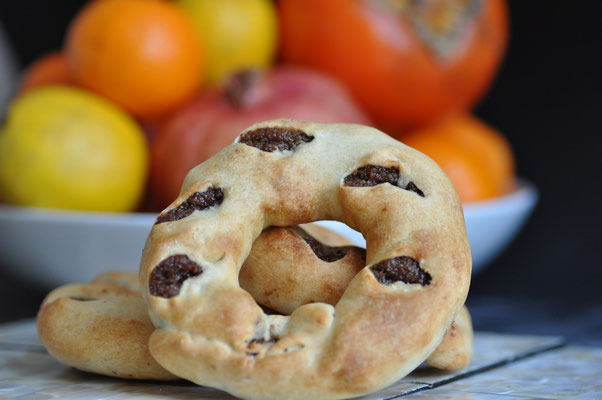 A favorite bread in Malta is the Hobz tal-Malti (Maltese bread). Bread is a staple in Malta (as in virtually every ancient society) especially due to the hot summers and cold humid winters which are ideal for cultivating grains. Hobz comes from Arabic and further reflects Arabic and North African influences on Maltese cuisine. Maltese bread is unique in that it uses a starter to help it rise, so it’s technically considered sourdough. The fermentation process takes at least seven hours and yields a bread with a crunchy, hard crust. For common people in ancient times, bread might have been the only meal of the day, so the dough was often mixed with vegetables, cheese, or whatever other ingredients were on hand to make it as filling as possible and stretch the available food. Therefore, there are countless variations on the ingredients the hobz might be made with.  Hobz-biz-zejt u t-tadam is a bread in which the dough is stuffed with capers, olives, or tuna, seasoned with salt and pepper, and rubbed with tomato paste once baked. Tal-gbejniet is topped with thinly sliced potatoes and cheese curds. Tal-incova is made with anchovies, tomatoes, onions, and basil and topped with potato slices.

Cake Art Malta thrives on innovation and artistic expression. We work hard to bring creative ideas to life in a beautiful and edible way to enhance any celebration or special event. In this way, it is very similar to the Maltese food of its heritage, as through the centuries, Malta’s cuisine has shown extraordinary versatility and ability to accept change; this has allowed it to become a well-loved culinary influence in Europe, the Mediterranean, and the wider world.

Maltese cuisine is full of fascinating history and multicultural influences. Over centuries of change and adaptation to events, it has evolved into the tradition we know it as today- fluid and flexible, yet true to itself. Cake Art Malta embodies this dynamic traditionalism with tried-and-true recipes that can be customized to any client’s unique tastes and needs.